By: Daniel Gerzina , photos by Marc Much  @DanielGerzina, Eater

Welcome back to One Year In, a feature in which Eater sits down for a chat with the chefs and owners of restaurants celebrating their one year anniversary.

Five years ago, brothers and real estate investors Nader, Rafid and Fadi Hindo purchased the historic three-floor building at 111 W. Hubbard St. with plans to bring on a hospitality group to implement and operate a concept. But as time passed, the Hindos began to see a very ambitious “polished, glamorous, sophisticated” concept of their own, where each floor had a “different flavor,” and, after talks with various operators, they “didn’t see anyone that could consummate the vision” and decided to take the plunge and become owner-operators of the space themselves. Following two years of secretive construction and high-profile hirings, deliberately without marketing, they unveiled Celeste on February 3, 2014.

After a “quiet” opening, Celeste has grown in the first year through word-of-mouth, customer curiosity (and sometimes confusion), standout beverage programs and gorgeous design. Two of the brothers, Nader and Rafid, chatted about the original concept, the secretive pre-opening, and changes to come.

What was the original concept?

Rafid Hindo: Craft cocktails was the original concept but seeing the space and wanting an elevated experience, we wanted to push the food, the music, and the design.

Nader Hindo: The core being craft cocktails but having multiple floors we started to expand our vision to various flavors of what a craft cocktail supper club would be like today. Our inspiration was really 1800s and into the early part of the century, a period where Chicago was rising into a major international city right after the World’s Fair, with nightlife-driven food and beverage and entertainment. Having multiple floors gave us the idea of flavoring concepts differently on each floor, which is how we ended up having a bar on the first floor with a lounge on the second floor and the third will be something unique and different that we’ll be opening soon. And we also extended the building to the rooftop and built a private garden. We thought it was interesting having various floors suiting whatever the guest’s mood may be.

R: It was a very ambitious project to say the least, which is why it took quite some time.

Pre-opening, you brought on a bunch of high profile mixologists that didn’t all end up being there for the opening. How did you get involved with all of them?

N: We come from a family business, we’re three brothers and we’re constantly collaborating and managing by committee. We wanted to transfer that same culture into this new business. Multiple floors, multiple programs; from food and beverage all the way to music. Our approach was recruiting the best talents we encountered and we worked hard on putting that team together. So the Celesteclass of 2014 is done and now we have the new class of 2015.

R: Josh Pearson, Freddie Sarkis, Sterling Field, everybody was here a year before we opened. We had the bar team design the bars and the program. They walked into an empty shell.

I used to call it the “Secret Swirl Wine Bar Project” before it opened. Why so secretive?

R: We didn’t want to over-promise and under-deliver. We wanted to do everything methodical and make sure we had it right before we rolled it out. We had so much publicity and we wanted to go the other direction and do it in a very subdued way and have the people come in and see for themselves.

N: And one of the things that made us take pause was how quickly the neighborhood transformed. When we bought the building, Epic (across the street) was the only place that was here. There was no Slurping Turtle or Hubbard Inn or Paris Club; this was on the outer borders of the River North nightlife at the time. This was something we pondered, whether to stay the course or be a cohesive component of the transformation, and we ended up doing both I feel.

R: We didn’t put a sign up because we felt the street had too many signs. We wanted to attract the right people and the right crowd to the space.

N: I would have someone walk up to me and say, “I don’t know what kind of business model you’re doing but it’s horrible because I couldn’t even find the place.” And the same night I’d have a couple come up to me and say, “please, stay the course, we love that you don’t have a sign.” We stuck to our guns and kept going. 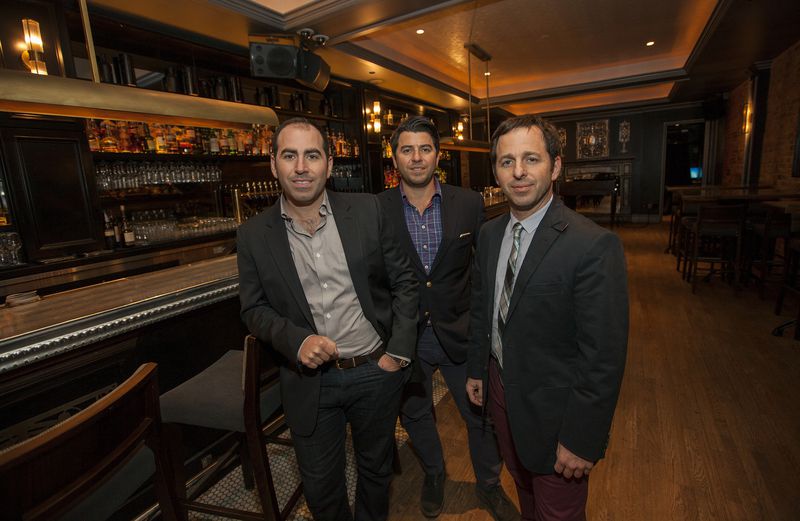 One day, just about a year ago, you announced “we’re opening today” and that’s about it. How did that first day and early period go?

R: We opened in the Polar Vortex period. I always think back to sitting down with the PR company and whatever and when we told them what we wanted to do, everybody asked when we were going to release it. But we were really trying to do it differently and everybody looked at us like we were crazy, and probably we were, because when we opened it was very quiet. It was kind of how we wanted it, to do a gradual build-up, as opposed to opening with a blast. I remember it was a Monday and it was so cold places were shutting down because no one was on the street.

N: We started with a very successful friends and family, many people from the industry came, and that started building a very slow and very steady momentum. It was sort of the opposite of what a (restaurant or bar opening usually) is like, where there’s a big opening. Within weeks, we started to develop a reputation as a new place to discover.

How you handled the door was interesting, it was sometimes confusing to people whether to make a reservation, can I go upstairs, can I sit at the bar. How has that gone?

R: When we opened we wanted the process to be very democratic. We wanted the opposite of a bottle service club—something accessible and diverse. The problem we had was when we opened a lot of the places around us had gone through different (clubby) periods and we ended up getting certain crowds that didn’t fit Celeste.

N: We wanted (crowds) that would compliment the elegance and the refined nature of the space so we have some dress code requirements and we have occupancy requirements. We try not to pack the space and often times we serve lower than our occupancy when we have a line outside. The door was always something that was an integral part of what Celeste is and having multiple floors and dining added more variables to what the door has to handle. One of the issues we had with doing little marketing is a lot of the guests don’t know that we have a second floor or they’ll think the second floor is VIP.

With very little marketing, how have you gone about educating people about Celeste?

R: As they walk in, there’s an education process about the different floors. If a host or manager isn’t busy, they’re giving them tours. A lot of times the guest will see a rope or see a host standing and it looks intimidating but if they take a tour they’re more informed. It’s been more word of mouth.

There’s been changes in staff and the cocktails. What’s coming up?

N: We’ve changed the program on the first floor. The concept is still the same, fast and easy cocktails that work with a bar format, but it’s changing seasonally so we have a winter program. The second floor is going to be changed next month – we’re going to focus on classic cocktails, and that was the original program for that floor. The whole concept is complete with all the floors open but since we didn’t open with the third floor, the second floor program was a merger of the second and third. But we’re getting ready to open the third floor and the modern cocktails from the second floor program will elevate to the third, which will also have a rare spirits program. We’ll do an unveiling in probably March or April.

R: And we only opened the rooftop towards the end of the season last year; this year we will have a full cycle so it will be a more comprehensive program.

You guys have had some extravagant parties, a lot of celebrities, and delivered fried chicken to Air Force Two. How did these things come about?

N: There was nothing planned or deliberate and some people think we missed the mark with marketing and PR, but a lot of it has to do with being so discreet and being so intimate and not so visible. A lot of celebrities and athletes will come to us and like the fact that they’re being treated as normal guests without the uncomfortableness of being in the public eye. And we have great late-night food, coupled with cocktails and music; it’s a unique offering. (Some places) will pay for celebrities to show up and we have not done any of that. 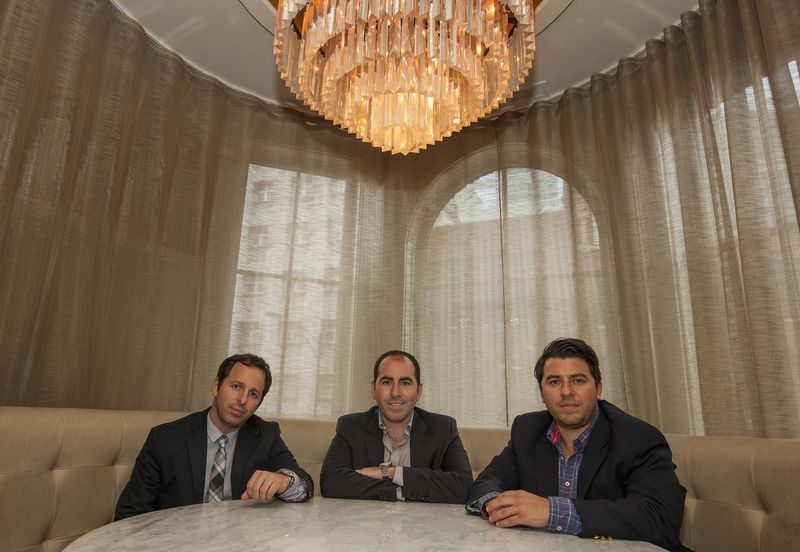 What do you have planned for the anniversary?

N: On March 26, 27 and 28, that weekend, it’s going to be a food, beverage and entertainment extravaganza. We’ll be unveiling the new second floor program, we’ll have entertainment and theatrics, and the kitchen will whip out some of our classics that we’ll be saying goodbye to and welcoming some of our new items. Each day will have some kind of special offerings.

And you have a new chef, Nick Lacasse.

R: We’ve known Nick for a while and he left mfk and will be heading to Half Acre, but that will probably be another year from now. He’ll be here for the foreseeable future and working with the kitchen and bar teams, because we want to have food that pairs more with cocktails. He’ll be working on the spring menu.

N: Part of our culture of collaboration was people going in and out, chef Aaron (Lirette) wants to explore and Nick wanted to do something different, so we constantly have our doors open for people to come in and leave and come back. It’s an evolving concept.

What else do you have coming up?

N: A year into it it feels like we opened three restaurants, not one. And we have something in the medium future, another concept and project that we’re in the early phases of; about a year or so from now. And I have to leave it at that.